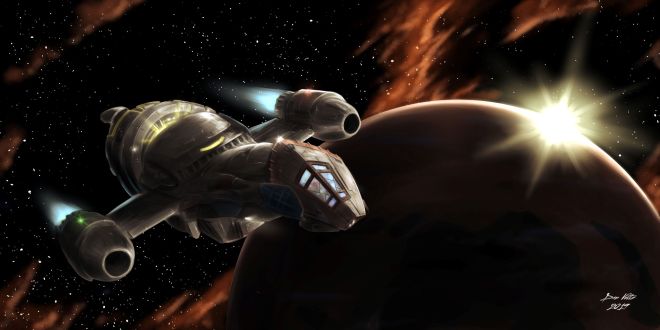 Posted on February 6, 2020 by danvoltzart Posted in Fan Art

So, there’s probably a rule on the internet somewhere that every piece of Firefly art has to be titled “You Can’t Take the Sky From Me,” right? Well, I’m certainly following along in that grand tradition. This piece features the Firefly class transport Serenity, as featured in both the Firefly television show and Serenity, the follow-up movie.

I know, at the point, Firefly and Serenity are both on the older side. But if you haven’t watched them, you should. They are both so, so good! This piece was originally commissioned by a fan–I made some tweaks to their version so it’s unique. This version is open to everyone. Kind of like the sky. 🙂